I'm a Scientist: Supported by Wellcome and UKRI
Skip to content

What does it mean to sequence a genome

If one of these wasps stung you how much damage would it do and how painful would it be?Or would it just hurt as bad as

How long does it live for?

What part of the sea does it come from

What is a stem cell?

do you squirt out ink

Do you live in freshwater, saltwater or both?

Can you kill someone?

Would sequencing your genome be useful for the development of rabies vaccines or cures and how long might this take?

So if a Giant Hogweed stings me and I stay in the dark like a vampire, will I be affected?

How does the Lion’s Mane Jellyfish reproduce both sexually and asexually?

Why do your baby jelly fish cling to hard surfaces, What would it be beneficial to the baby jellyfish if we stopped

can these wasps die after they sting someone?

who go out more male or female??

The Asian hornets scientific name is Vespa velutina which translated to English from Latin means wasp velvety. So is 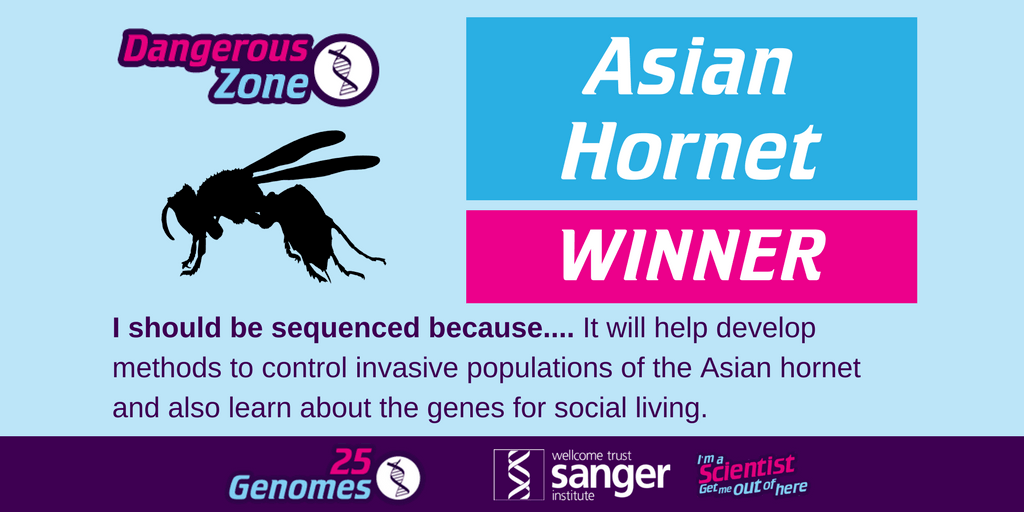 ASK about the species and sequencing.

CHAT in a 30 minute text chat with the species champion.

VOTE for a species to be sequenced for the first time ever!

The Wellcome Sanger Institute is one of the world’s leading genomics research centres. In celebration of its 25th Anniversary, the Institute is going to decode the DNA of 25 UK species for the first time…and you can vote to decide 5 of them! From 6th November – 8th December, a team of scientists and wildlife experts will each champion a species they think should have its entire DNA sequence decoded.

This is the Dangerous Zone, which has seven species in the running. Some species are invasive and harmful. They could spread disease, prey on smaller organisms or contribute to the declining population of another organism by competing for food.

In this zone you’ll meet seven species, including the giant hogweed – a plant which causes your skin to blister, and the oak apple gallwasp, which hijack the development of a plant in order for the gallwasp to reproduce.

There is also the Daubenton’s bat, a species which is known to carry a type of rabies virus, and the leathery sea squirt, a sea creature hogging all the food so others are struggling to survive.